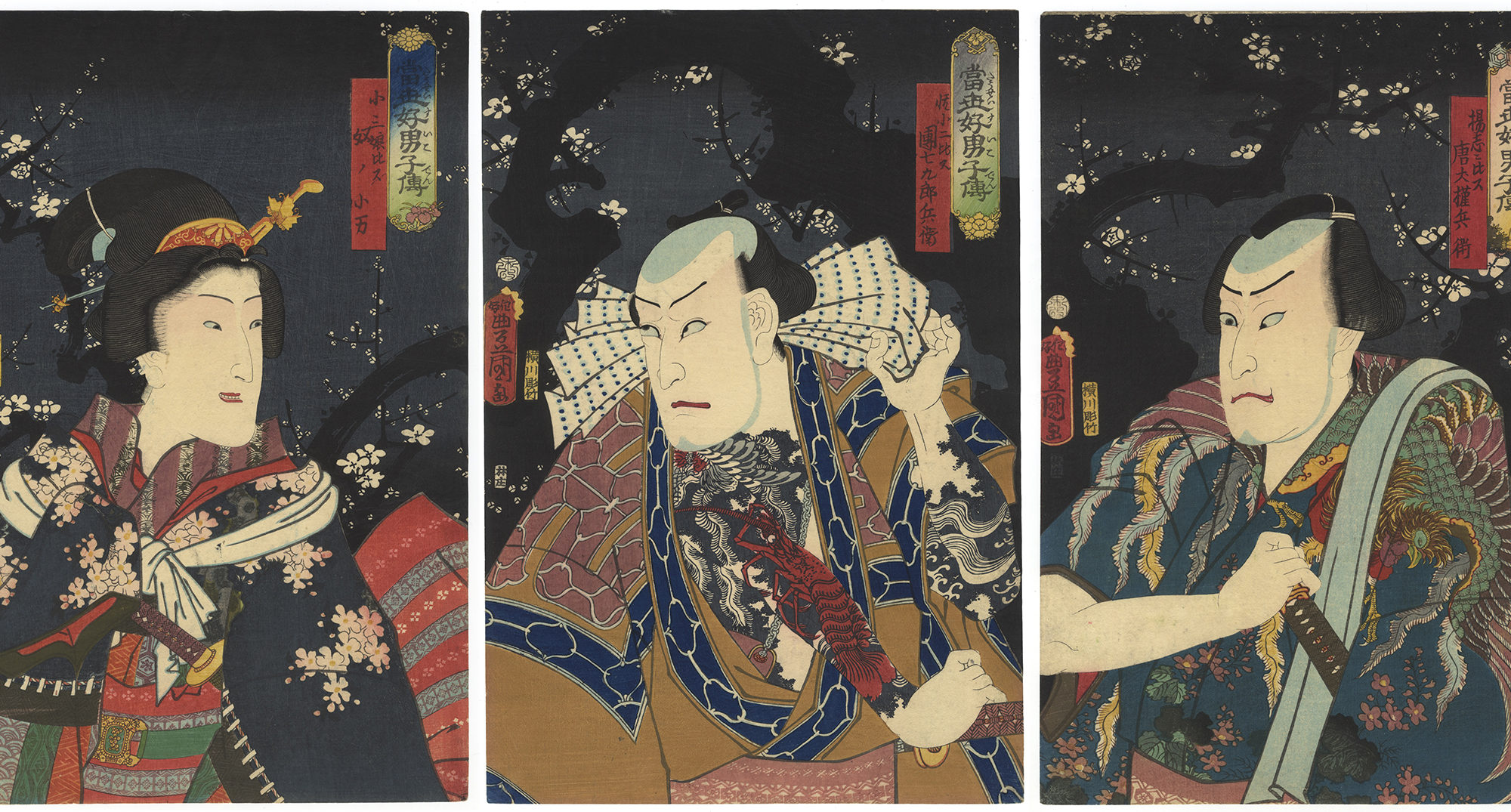 The Art of Traditional Japanese Tattoos and Woodblock Prints

Japanese Gallery Kensington were proud to share a collection of extraordinary traditional woodblock prints at the London Tattoo Convention in September 2019. Featuring works by the great masters of ukiyo-e such as Kuniyoshi, Kunichika, and Toyokuni III, as well as prints made by contemporary artist Paul Binnie, these prints offered an insightful view to Japanese tattoo culture through the ages in the most fitting environment.

[The Floating World of Edo]

Traditional Japanese tattoos in the form we know today evolved alongside the popularity of ukiyo-e (prints of the floating world) in mid-18th century Edo period (1603- 1868). In a time when the strict, controlling Tokugawa government supressed any signs of individuality, tattoos and printmaking were proof that the working classes found their own way of expressing themselves through the vibrant world of popular art. Extremely elaborate, both artistically and culturally, the purpose of Japanese tattoos shifted over time from a form of punishment to beautification, with designs depicting religious and symbolical meaning. Even today, their designs still stand out as some of the most elaborate and technically challenging in the world, demanding not only skill, imagination and dedication, but also fine aesthetic values.

At their inception and during their development, woodblock prints and Japanese tattoo art were interdependent. Both enjoyed grand status as popular art forms of the Edo period and both exerted political influence, depicted social change, and reached a broader audience than could the more rarefied art forms of the time that were only available to the nobility.

Ukiyo-e reflected the colourful world of the Edo period, a time when prints were mass produced at a low cost which made them affordable to the working classes. These prints depicted everyday urban life, teahouses, kabuki actors, warriors, battle scenes, courtesans and stylish people, themes easy to relate to by all walks of life. The stories told through woodblock prints involved sensationalism, including murder, sex, greed, the pursuit of power, but still valued the traditional ideals of strength and loyalty.

[Heroes of the Suikoden]

It was the introduction of Suikoden, the classic literary tale from China, coupled with the imagination and skill of Japanese woodblock artists that really elevated Japanese tattooing into a fine art. Utagawa Kuniyoshi (1797 – 1861)’s first great artistic breakthrough came with the publication of the 108 heroes of Suikoden (‘Stories of the Water Margin’), having the greatest impact on the evolution of tattoo designs, as some of the heroes themselves displayed the most striking back pieces. These outlaws and brigands were seen as men of honour who would rebel against bureaucracy, a Robin-Hood-like band that made the story of a revolutionary novel with implications resenting the authority of the time.

Alongside Chinese rebels, other famous characters from history and legend were soon used in tattoo designs including Fujin and Raijin, Shoki the demon slayer or Kintaro. They were often surrounded by floral motifs like peonies, chrysanthemums, maple leaves and cherry blossoms. Besides them, creatures both mythical and real featured heavily in tattoo designs, such as dragons, phoenixes, tigers, karajishi (Chinese lions), koi fish, falcons, or snakes. Most of these motifs lived on through the centuries and can still be rendered on skin in the same style by tattoo artists that practice wabori, or traditional Japanese tattoo designs.

[From carvers to tattoo artists]

It is said that woodblock artists were the first to begin Japanese tattoos, employing the same tools they used in their art such as chisels and black ink. When the townspeople of Edo began looking for individuals to tattoo woodblock designs, they drew upon craftsmen already familiar with those designs.

Since irezumi originally referred to tattoos as a form of punishment, tattooists refused to use this term, wishing to distance their art from the rather brutal practice of punishment tattooing. They began to call themselves horishi, derived from the verb ‘horu’ (to dig or carve) the same title used by the carvers of woodblock prints. This re-titling emphasised the skills tattooing required and linked the tattoo to the woodblock. The term irezumi has lost its negative connotations and today refers exclusively to the highly developed Japanese decorative tattoo in general.

In order to do wabori, the tattoo artist needs profound knowledge and understanding of various aspects of Japanese culture, such as history, folklore, artistic motifs, the importance of seasons and how they influence the relationship between motifs and even the position of the tattoo design on the body. Even today, tattoo artists who practice wabori will very often turn to woodblock prints for inspiration.

It was only following the World War II that the practice of tattooing was freed from government restrictions and also the time when Japanese mafia (yakuza) proliferated, as their love of tattoos. Given the associations with the underworld, there are still echoes that can be heard today against tattoo artists in Japan, leaving the industry in the shadows for the most part. On-going debates whether tattooing should be considered a medical practice as well as social sanctions against artists can only be reminders of similar conflicts that sparked in the past. Nonetheless, Japanese tattoo artists who still employ traditional designs in their work stay faithful to values that were brought down through generations.

Even though Western tattoo styles are becoming more popular with the youth, Japanese tattooists have historically been reluctant to mix styles coming from different cultures, showing instead great pride in the allegiance to traditional designs. Japanese tattoo styles have remained relatively pure, still reproducing images previously created by ukiyo-e.

Both wabori and ukiyo-e reached high levels of popularity because of the way they depicted the humanity of the time. While ukiyo-e relied on mass production and technology, tattoos embodied the very human aspects that its visual images represented. Repeatedly outlawed and pushed underground, in some respects Japanese tattooists managed to strengthen their culture which withstood the test of time. Tattoos are perhaps the best contemporary expression of a floating world, in their transcendent beauty on an ephemeral material such as human skin.

ukiyo-e relied on mass production and technology, tattoos embodied the very human aspects that its visual images represented. Repeatedly outlawed and pushed underground, in some respects Japanese tattooists managed to strengthen their culture which withstood the test of time. Tattoos are perhaps the best contemporary expression of a floating world, in their transcendent beauty on an ephemeral material such as human skin.