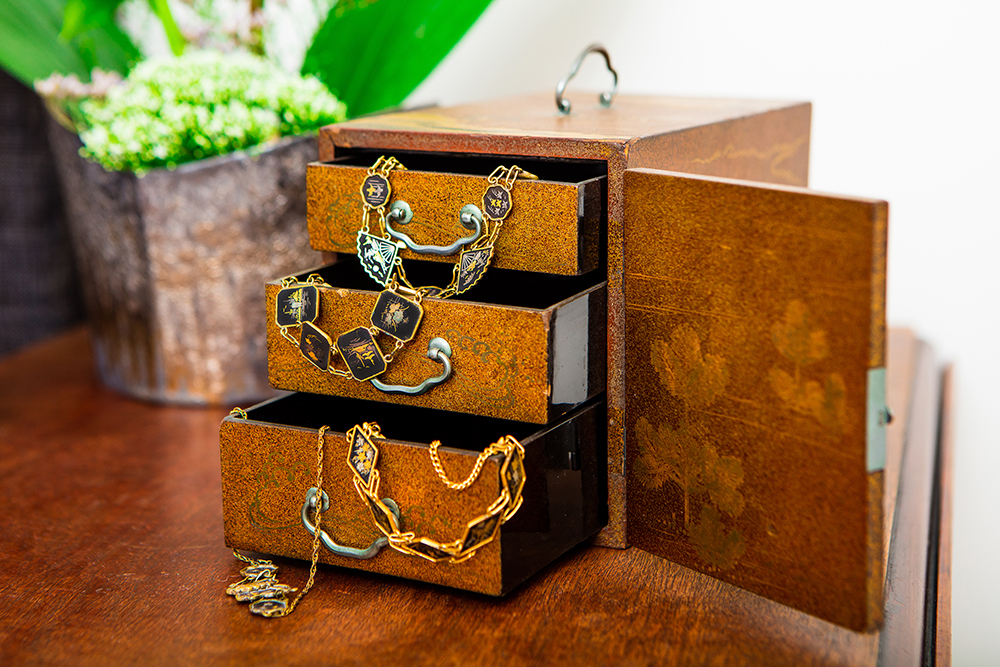 The history and production of metal inlay in Japan.

Metal inlay jewellery is created through a process called damascening. It involves inlaying a steel ground with thin threads of gold and silver. The ground is then sealed through either oxidisation or via use of lacquer.

The Japanese term for damascene work is zogan (象嵌). The latter encompasses not just metal inlay, but can also describe other inlay techniques. One such example is Gohon Mishima ware, which refers to a type of pottery that is decorated via an inlay technique. In the case of Mishima ware, the material used as both a ground and inlay is clay. Another example is Shibayama inlay (Shibayama zogan), which describes lacquer inlayed with shell, coral, tortoiseshell and ivory.

The jewellery and small items we are displaying on this page, are largely so-called Komai goods, produced by the Komai family or their firm.

Historically following the development of the Komai family’s craft, gives us an interesting insight into the development of Japanese art as a whole. This family had produced metal inlay items for generations, well before the Komai firm was founded in 1841, but these items initially took the shape of sword furniture for the Samurai. Sword fittings could be very ornate and personal in design and required a high degree of skill to produce. Due to various changes in Japanese politics over time, Otojiro Komai eventually transitioned from creating sword furniture to other items, using the same technique.

The emergence of metal inlay techniques

Craftmanship commissioned by the Samurai class was prevalent during a very particular, if long, period of time in Japanese history: the Edo period. It began with the unification of Japanese feudal lords under the Tokugawa government around 1603, which calmed the constant warring factions and allowed for the arts to flourish. Among these artistic disciplines were pottery, metal work and woodblock printing.

The Edo period continued for roughly 250 years, coming to an end in 1868. At this point in time, the isolationist government of the Edo period was replaced by the new governing system of the Meiji period.

The Meiji period brought many cultural changes to Japan after the country opened its doors to the West, as well as structural changes to the government, with it. What most critically impacted the arts, was the new ruling outlawing the carrying of swords by samurai. This ruling suddenly put sword smiths and sword furniture artisans into a tight spot, as they lost most of their clientele.

Luckily, these sword smithing and metalworking skills could be used to produce a variety of items. Upon realising this, craftsmen started making various every-day metal objects that featured inlays. Among these objects are vases, mirrors, cigarette/tobacco cases, make-up cases, cufflinks and jewellery.

Today, these objects can be found in different countries, while a few remain in Japan. The reason the majority of them is abroad is that they were made for export and take the shape of distinctly Western items, as you can tell if you pay close attention to the list above. Cigarette cases, make-up cases, mirrors, vases and jewellery had a vastly different shape in Japan and cufflinks largely didn’t exist, because there was nowhere to fasten them on traditional clothing.

In this way, the Meiji period meant both lost and new-found opportunities for smiths, as this kind of international trade only became possible once Japan opened its borders. The Komai family then participated in several international expositions and gained renown and recognition for their craft.

The process of creating metal inlay: