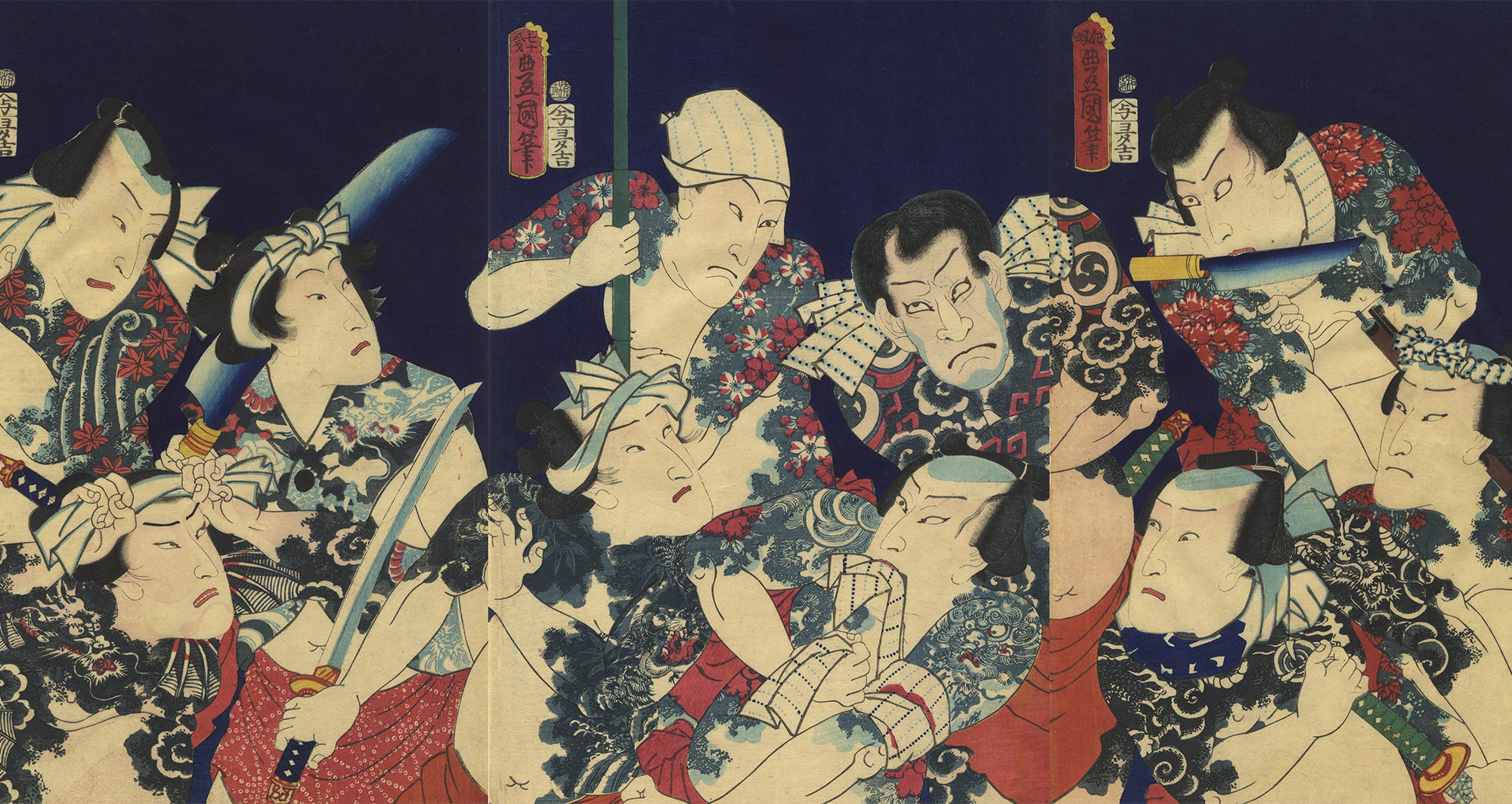 For the longest time, Japanese decorative tattoos were called horimono (彫り物, ‘carved’ ‘thing’ or ‘object’) while those used for punishment irezumi (入れ墨) which is why tattooists refused to use this term, wishing to distance their art from the rather brutal practice of punishment tattooing. Irezumi is the kun-yomi, or Chinese reading of the kanji 刺⻘, that can also be read shisei following the on-yomi, or Japanese reading. Either way, the kanji refers to the act of inserting (ire) ink (sumi) into the skin. The second reading, however, takes another layer of meaning as the character for blue, ⻘, is read as sei. Despite being black, when inserted into the skin following the tebori (hand poked) technique, the pigment comes out blue-green, a characteristic that only Japanese tattoos have and that is highly praised.

Horimono is also used as a term for carvings in general, such as the engraved images in the blade of a Japanese sword, which elevates the practice and sees tattooing as a craft. The first Japanese tattooists began to call themselves horishi, and assumed titles based on the prefix hori (彫り) derived from the verb horu (to dig or carve) the same title used by the carvers of woodblock prints. These tattooists also began organising master- apprentice relationships. Nowadays, the practice can be seen in many recognised tattooists such as Horitoshi, Horiyasu, Horikazu, Horicho, who still follow traditional nomenclature and hierarchy. The term irezumi has lost its negative connotations, though the term tends to be avoided by those who practice Japanese traditional tattooing exclusively.

Artists involved with the design process of woodblock prints were organised in schools. An apprentice might choose a school according to personal preference for artistic style or subject: musha-e (warrior prints), bijin-ga (beautiful women), yakusha- e (actors), fukei-ga (landscape). There are often cases when apprentices chose a school based on the fame and reputation of the master. In the tattoo world, these apprenticeships are still organised in ‘families’ rather than schools, as the apprentice would often live in with his master. This gives both parties a sense of artistic legacy, most evident in the practice of students taking up the name of their master, followed by a number that indicates the lineage. Profound knowledge and understanding of various aspects of Japanese culture, such as history, folklore, artistic and seasonal motifs, even the position of the tattoo design on the body are of highest importance.

Japanese tattoos have a very similar process with printmaking, from the outline system to large areas of pure colour and style of shading. As the popularity of tattoos rose, the designs themselves developed accordingly and became more embellished and beautiful. Tattooists trained in the tebori technique, even today, will draw directly from one of these woodblock prints, and they form the basis of the classic Japanese tattoo.

Many tattooists were formerly woodblock engravers and they hoped to achieve fame and success through this art which in woodblock printing were solely reserved for the designer. The woodblock carver, whose job was to follow the lines prescribed by the artist, had very little artistic freedom. Many prints did credit the carver, but the primary artist of the woodblock print was considered to be the designer of the original drawing. When the townspeople of Edo began looking for individuals to tattoo woodblock designs, they drew upon craftsmen already familiar with the visual vocabulary. As a result, woodblock carvers, painters and other such artisans were among the first tattoo artists. In this way, ukiyo-e influenced the design and composition of large pictorial tattoos.